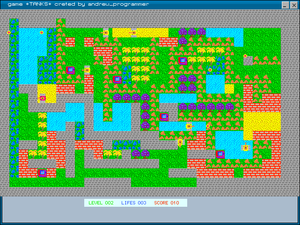 KolibriOS 0.7.7.0 distribution does not contain it, you can download it from here(with the level editor).

The first (and, perhaps, the only) game, created entirely in Menuet/Kolibri.

The goal is to destroy all enemy bases. Remember that in the water the tank speed decreases, and in the trees tank is invisible. Although the enemy's tanks are not very clever, but they still will not let you to be bored.

There had to be 32 levels in the game, but the author had enough fantasy for just 15 levels. But if you want you can do new 17 levels yourself, using a special level editor LevelEdit. It has a simple interface.
Arrow keys "Up", "Down", "Right" and "Left" control position of the template on the map. Use "Space" key to change a template
(there are 10 templates). To save the map press "F2" and input full path to the file together with the name of the new file (for example:'/hd/1/lev/lev01.lev'). To download an existing level, press "F1" and enter the path to the file. Tanks appears to the right from the base.

To move the tank use arrow keys.
To make a short press "Space".