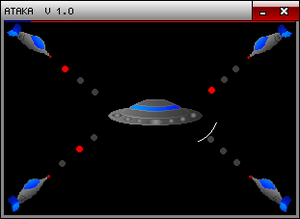 Apparently you are an alien whose UFO was attacked by enemies. To protect your UFO from enemy shells, you have to move your shield in the right direction. There is a line of two colors - blue and red in the upper part of the game's window. After each hit of an enemy shell in your UFO blue color is becoming less and red more, and vice versa each time you reflect a shell blue color is becoming more and red less. When the whole line is blue, you get to the new stage, and shells become faster. If the whole line become red, it means that you loose.

Game process controlled by the num-pad