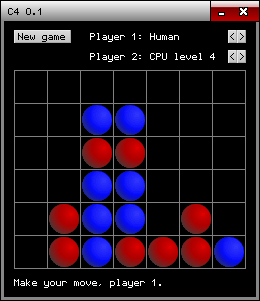 You have to build a horizontal, vertical or diagonal row from four balls of "your" color and at the same time to prevent the enemy (human or computer) to build a row of balls of another color.

To start a new game press "New game"
To set the first and the second player use buttons "<" and ">". Choices: Human, CPU level 1-7
To put a ball to a cell just click one of the vertical columns.