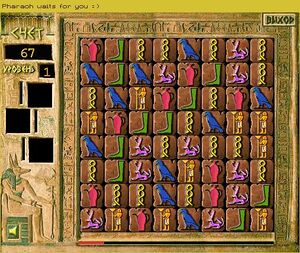 The main idea of the game is to open door to the next room of the pharaon tomb moving characters on the entrance. Game field size is equal to 8x8. You can swap two neighboring characters on one line only if a new combination of two or three same characters will be formed after the swap. Such rows will disappear, and a new place will be filled by characters that fall over. Missing characters are generated randomly. You get points for the vanished characters. Points for a characters combination counts by the formula: L+(L+1)^(N-3). Points number will never be more than 20*L*N, where N - is a number of characters in the combination, and L - номер уровня. To get to the next level you have to remove a certain number of characters (different at each level). There is a colored status line at the bottom of the game's window, which shows how much characters you have already removed, and how much you have to remove to get to the next level.

Player gets a "free" character, for each combination of 4 and more characters and for passing each quater of the level, starting from the 2nd level. "Free" character - is a normal character (randomly generated), which is in the player's "pocket", and if necessary it can be inserted to any place by the player instead of the character that is already occupy that place.

Player gets a "space bender", for each combination of 6 and more characters and for passing each half of the level, starting from the 4th level. "Space bender", when it used, allows to make 3 moves diagonally (not necessarily each after each other).

Player can't have more than 1 additional character of each type (1 simle, 1 joker and 1 bender).

The game is over, if player can't make even one combination of characters.

Press "1" key to start a new game.
You can change start level number before you start a new game (if you have passed one or more).
To swap neighboring blocks, first click on one of them, and then on another. If the movement is possible, it will happen (leading to the disappearance of a raw of blocks).
If your score will go in the top ten, after the message "Game Over", then type your name in the "Best results" window and press "Enter". To return to the menu, press "Esc".