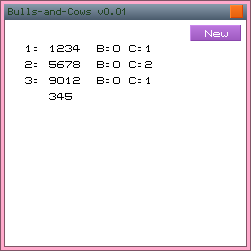 Computer conceived a secret 4-digit number with not repeating digits. The player (ie you) makes attempts to guess the number. One attempt is a 4-digit number with not repeating digits reported to the opponent. The computer reports in response how many digits guessed without the concurrence of their positions in the secret number and how many guessed together with the position in the secret number.

You have 10 attempts in total.